The island of Stromboli rises to a height of 924 meters on the top of « Variconi ». The main island was formed in different phases in the last 85 000 years.

The beginning of the stratovolcano Stromboli

All started at the Pleistocene. The island emerged from the sea and 3 huge caldeiras (1) contributed to the actual shape of the South and the East of the island. Then, 2 major collapses (2) (the first at the Holocene and the second at the Roman-Age) along the north-western flank of the edifice changed the later. Finally, about 5 000 years ago the north-western side of the land saw a series of collapses, creating the famous « Sciara del Fuoco ».

Since 3 000 years, Stromboli is in a perpetual activity. We will focus on the recent and present-day activity of Stromboli, but we have to give you some key dates before.

250 000 years ago → The magma was formed like in a subduction zone, like the Ring of Fire in the Pacific Ocean. 200 000 years ago → Strombolicchio was born. This volcanic neck is constituted by the remaining of the volcano’s conduit. 5 000 years ago → The Sciara del Fuoco, a landslide, was created. It continues 700 meters below the sea. Magma intrusions along the main fissure of the island caused overpressure at the beginning of the area. It is really unstable because of frequent collapses.

The most important eruption in Stromboli’s history and the most impressive of the 20th Century. All the year, the volcano erupted continuously but there were 2 very large eruptions, which pulsed the main crater. The paroxysmal eruption happened on September 11th. This day, the hash rain lasted 40 min. Rocky blocks weighed 30 tonnes and were projected up to 3km of the crater. Ginostra’s and Stromboli’s villages were partially destroyed. There was a pyroclastic flow even if it is abnormal for this volcano. Indeed, the normal strombolian activity is composed of mild explosivity. The last consists in a continuous passive streaming of gas, with sometimes small quantity of magma ejected. The tsunami caused by the explosion associated with collapsed roofs destroyed constructed buildings. The balance sheet drawed up was 6 deaths. The eruptive colums generated rose at 4 000m height. All the cultures were destroyed, like the houses, and the fear led to the depopulation of the island (from 3 000 to 350 people).

All started at the end of October. The seismic activity increased and it was rare since 1985. The Italian Government said that no one was endangered. On December 28th 2002, at 18.30 p.m, a very big explosion covered Stromboli’s village with hash. At the same time, an effusive eruption opened a crack from 200 meters to 600 meters of altitude. 2 days after, the North-East rock face collapsed and a little lava flow appeared above the Sciara del Fuoco. A landslide toward the sea created a 500 000m3 dust pulm and a 20 000m3 avalanche of volcanic fragments. That provoked big waves of 8 meters which touched Stromboli’s and Ginostra’s coasts, but also Panarea and Milazzo situated around 60km from Stromboli. These last caused materials and humans damages (around 6 wounded). Then Stromboli was depived of electricity and drinkable water. The lava flows lasted more than 6 months, accompanied by ash falls and a high landslide risk.

The 5th of April 2003, a very important explosion lasted 8 min, on the North-East and South-West craters. The column rose at 4 000 meters and some rocky blocks, which weighted around 10 000 tonnes, fell on Genostra’s village. It caused damages on habitations, but nobody was injured. Then a plume, which measured more than 1km above the sommital crater and which was full of ash went down. It caused a pyroclastic flow in the sommital area. The last was covered by dozens of centimetres of blocks and ash. Only the scientists, who flow above the site in helicopter were endangered but there was no wounded at all. 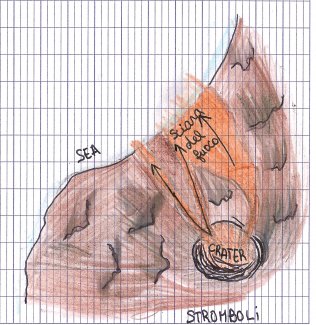 Lava and debris fallout in the Sciara del Fuoco.

This year, 2 parallel fissures have developed within the northeast crater, until the summit cone to the borders of the Sciara del Fuoco. It led to a very important vent, situated 400m above the sea level. An effusive eruption followed. The last finished on March 15th and it lasted 34 days : The column measured 2980 meters height, and about 107 kg of magma was erupted. The lava flows even extended to the sea.

On the highest part of Stromboli’s volcano, a new crater appeared. It was situated at 250 meters above the sea level. On August 6th and 7th, a lava flow went down along the Sciara del Fuoco. There wasn’t any gas emission. Thanks to this collapse, Ginostra’s and Stromboli’s villages weren’t touched because it is situated between then.