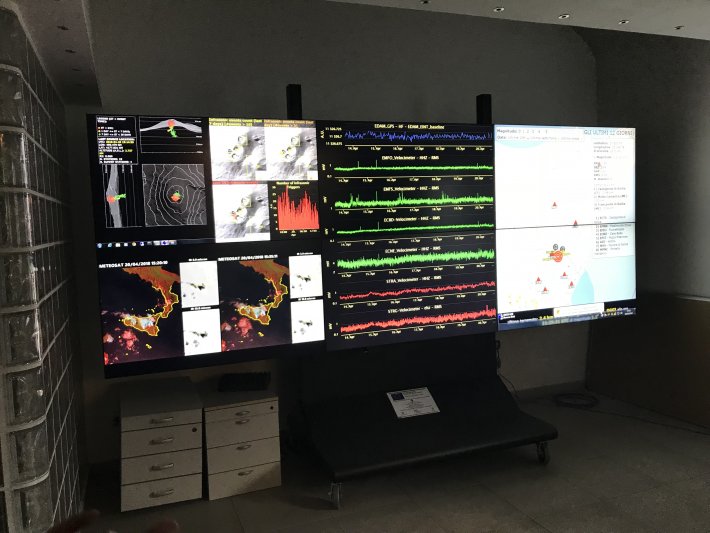 Italy, what a beautiful and volcanic country ! Here, at the INGV, the national institute of geophysics and volcanology, volcanoes are studied and monitored continuously. INGV has two main missions : • To study volcanoes and to try understanding them, • To inform the Civil Protection and the government to protect the population. The INGV has departments located in main cities and particularly in volcanic areas of Italy. In Sicily, at Catania it studies Stromboli, Vulcano and mainly Etna. How does this institute study volcanoes and particularly the complex volcanic system in Etna ?

Etna is complex because it exhibits diverse, current and past, types of eruptions : effusive, explosive and phreatomagmatic. As normal volcano does, Etna is built by the succession of eruptive products which form different layers. In the last years, it erupted up two twice in a month, with one or Or Métal précieux. Dans le cadre du séjour Le TrésOR des MINES nous chercherons de l’or dans le Val d’Anniviers, à la batée. two large eruptions (paroxysm) per year. Today, on the 26th of August 2016, there are four craters in the summit area and more than 250 adventives craters ; an adventive crater is formed on the flanks of a volcano. 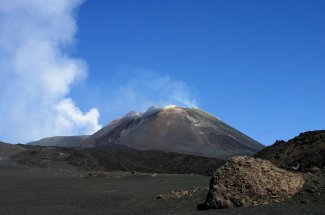 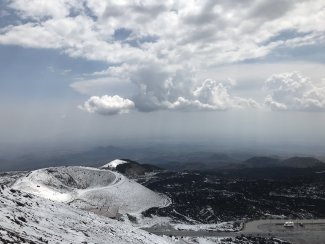 During paroxysm event, Etna produces lava flows and fire-fountains but we cannot predict if it will come out a fissure on the flank, a new crater or Or Métal précieux. Dans le cadre du séjour Le TrésOR des MINES nous chercherons de l’or dans le Val d’Anniviers, à la batée. fissure. Another specificity of this volcano is that since the eruptions of 2001 and 2002, which were very explosives and unexpected, it’s today one of the most studied volcanoes in the world.

Here is a short history of some famous eruptions at Etna : • In 1669, a big eruption which came from Monti Rossi in Nicolosi arrived in Catania and burned few villages on his path. • In 1893, Sicilians first tried to divert the lava flow that threatened Catania. • In 1991, Italian and American marine forces (and fishermen) successfully diverted the lava flow that threatened Zafferana.

In conclusion, Etna is an unusual volcano which is interesting for many scientists worldwide. Thus, it is covered by plenty of measurement and geolocalisation equipments installed by the INGV. Currently it monitors a network of approximately 200 stations.

To study the volcano the institute collects information in real time on the three zones : East, South and West.

Infrasonic stations to localize where magma rises along a conduit *. This technique is complementary and more precise that seismic record.

GPS radio stations to monitor the movement of rocks on surface

Clinometric stations to measure the angle of the slope and detect small swelling or collapse of all the edifice. Satellites also measure the deformation of volcanoes.

Camera to look at the summit (two types : thermal to detect the heat in the night and visible)

Gravimetric stations to analyze change in gravity, modified when a hot liquid is under the crust

Magnetic stations, because a fluid present under the crust disrupt the magnetism.

Direct and indirect detection of gases. The SO2 degassing is monitoring with permanent SO2 camera system and satellites. We also analyse the CO2 in more distal stations. Scientific started using satellites, an indirect geophysical methods, to detect active degassing of volcanoes, in 1978 with the Total Ozone Mapping Spectrometer install on NASA satellite.

INGV’s researchers normally climb Etna’s summit to make observations each week but when the volcano is in activity they try to go even more often because of the importance to collect observations continuously. They collect observations like morphological variations and bring back samples of lava or tephra to study them in the INGV laboratory. In the laboratory at Catania, scientists like Daniele Andronico analyze the components and the morphology of ash to comprehend the eruptive dynamism and to follow the shifting of the magma level in the volcanic conduit. Ash can be composed of fresh magma, called “juvenile”, of crystals, or “lithic fragments” composed of pre-existing rocks, and displays different morphologies (vesicular, fluidal, elongated and compact). All the information is send to the central control room or sala operativa in Catania. Here, there is always someone present because they make 24-hours rotations (0- 8h, 8-16h and 16-24h). They collect information on Etna, but also keep eyes open on the entire Italy and all around the World, no to miss any possible origin for some measured earthquakes. 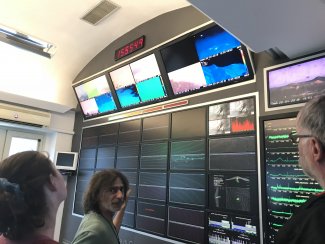 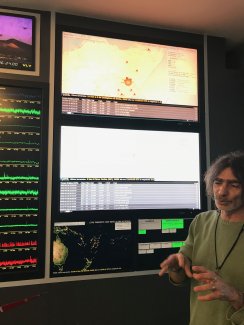 INGV has however some limitation to collect information :

It’s difficult to obtain permission from the government to film public places on volcanoes.

It’s even more difficult to find suitable places to install sensors and cameras.

There are too many sensors and it causes additional problems.

Lighting storms can also cut off the power in sensors and cameras. It’s expensive to send people or drones to repair them.

Before the economic crisis in 2007-2008, they had enough money to maintain all the sensors and video cameras, even when they got damaged. Today, it’s more difficult.

In conclusion studying a volcano requires a multitude of data. Like at the INGV, an efficient research in volcanology and geophysics requires a real time survey, continuous observation, reliable and robust equipment, many analyses of rocks, earthquakes monitoring and many other data.

* Recent study show that the International Monitoring System (IMS) infrasound network built to monitor nuclear explosions can also be used to record low-frequency sound waves (infrasound) from volcanic eruptions. You can hear below an audible representation of infrasound signals of the two major explosive phases in southern Chile’s Calbuco volcano erupted on 22 April 2015. The event led to the evacuation of more than 6,500 residents and affected aviation, agriculture, and infrastructure nearby. It also generated powerful seismic and infrasonic waves that were recorded at local, regional, and remote seismoacoustic stations, including five belonging to IMS, at distances between 1,525 and 5,122 kilometers away.

Infrasound from the 22–23 April 2015 eruption of Calbuco volcano, Chile.

Article searched and written by Elouan, Raphaelle and François, the participants of the scientific expedition Volcano Alert. It’s organised by the Education and participatory research program EXPLOREARTH of Objectif Sciences International (OSI). The 26nd August 2016.